So Haman was hanged that day. The Jews didn't have to worry about his evil schemes any more, but even though Haman was gone, his law was still in effect. The king gave all of Haman's property to queen Esther, and she in turn put her cousin Mordecai the Jew in charge of it. Then Esther brought Mordecai to the palace and introduced him as her cousin, and she once again addressed the king. "If my lord is pleased with me, please reverse the decree that Haman instated, that all Jews would be killed on March 7th." 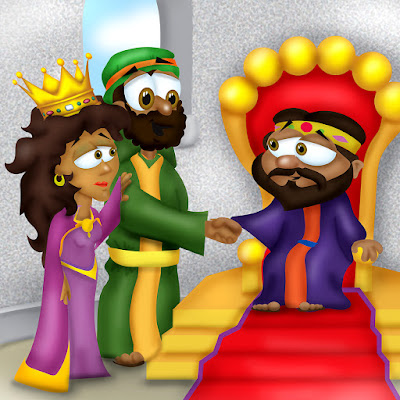 "I wish I could my dear Esther," the king responded. "But you see, I gave Haman my signet ring and he stamped the decree with it. No one.... not even I can reverse the law." He looked at queen Esther and Mordecai for a while, then he said. "Haman is dead because he wanted to annihilate the Jews. Now go ahead and send a message to the Jews in the king's name, telling them whatever you want, and seal it with the king's ring.  Remember, whatever is written in the king's name and sealed with this signet ring, cannot be revoked."

On June 25th, Mordecai summoned the king's secretaries and had them write down the new decree that was to be instated. He had the decree translated into the language of the different territories. He then sealed the decree with the king's signet ring and sent if off swiftly on horseback tall all 127 provinces of the kingdom.
Mordecai was smart. He wasn't able to stop Haman's law into going into affect. But he was able to instate an new law that said.... On March 7th of next year, all Jews can band together and fight or kill in order to protect their families. Mordecai knew that a lot of people in the kingdom would not risk their lives against a group of Jews.And he was right. On March 7th of the next year, the Jews banded together in large numbers to protect themselves and their families. Well not very people dared to attack the Jews. Even the governors, princes and royal officials sided with the Jews, because they all feared how powerful Mordecai the Jew had become.
There were a few violent outbreaks for the next two day.s The Jews ended up killing a couple hundred people, including Haman's sons. Finally when the decree time had passed, the Jews rested and celebrated., with a festival and gift giving. 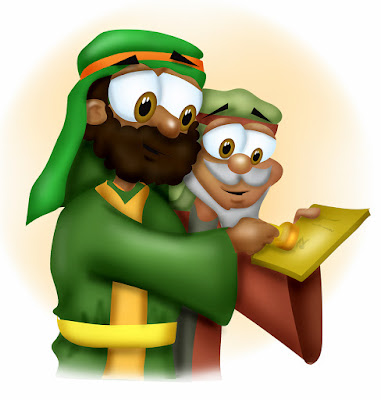 Mordecai knew that this was an important 2 day event for the Jews. He sent out a decree that these two days should be celebrated every year with large festival and gift giving to each other and to the poor. This would commemorate a time in Jewish history when they gained relief from their enemies, when their sorrow was turned to gladness and their mourning into joy.
They needed a name for this new holiday. Mordecai thought for a while, then he remembered how Haman had decided on which day to have the Jews killed. Haman cast lots. The lots were called purim. (It was sort of like rolling the dice in biblical times) So, in agreement with Queen Esther, the two day feast was called the Festival of Purim (named after the lots).

The Jews agreed to celebrate the Festival of Purim every year. They would tell their children to continue the festival, and to tell their children to continue and so on. And now, the Festival of Purim is still celebrated till this day.
King Xerxes promoted Mordecai to prime minister. He was second in authority to only the king himself. Mordecai was revered throughout the kingdom as a man who not only looked out for his people, the Jews, but also as a friend to all the people in the kingdom.

The book of Ester is an amazing true story. Even though God was never mentioned in the entire story, He was at work all along. Sometimes we feel like God is not present.... but He definitely is. He has a plan and sometimes things get worse before they get better. But even when it is worse, He is right beside you.

Next time we will begin the fascinating Book of Job.
Posted by MrBibleHead at 9:26 AM No comments:

The Tables Are Turned on Haman (Esther 6 and 7)

The king had just asked Haman what should be done for the man that the king wishes to honor. Haman, thinking that the king was talking about him, gave the king a very impressive list of things he could do. The king loved all Haman's ideas. Haman could not wait to tell his friends and family about this! 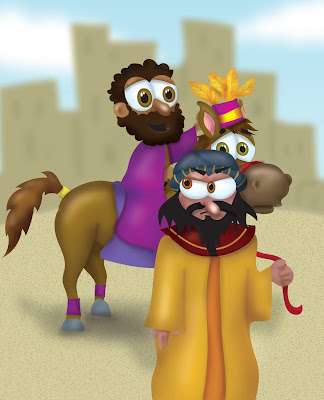 King Xerxes said to Haman. "All these things will be done!" The king continued as Haman grinned from ear to ear, "Hurry and get the robe and my horse and do all the tings just as you have said for Mordecai the Jew who is sitting at the gate of the palace."
Haman was speechless. "Mordecai the Jew?"He thought to himself. "I had gallows built to hang him and I was going to ask the king's permission, and now he wants to honor him?.... and I am the one that is going to carry it out?! This is terrible!" Haman grumbled to himself as he made it way out of the palace and to the palace gate to get Mordecai.

Haman took the robe and put it on Mordecai, placed him on the king's own horse and led him through the city square. As Haman led Mordecai around the square, he shouted, "This is what  happens to those the king wishes to honor!" Haman did as the king asked, but on the inside, he was feeling humiliated, dejected, unappreciated and like a fool.
When it was over, Mordecai returned to the city gate and Haman hurried home. When he got home, Haman told his wife, Zeresh, and all his friends what had happened. Haman went on for hours, telling everyone how humiliated he felt and that Mordecai the Jew did not deserve any of it. If anyone did, it was he himself. While Haman and his friends were still talking, one of the king's servants arrived to take Haman to Queen Esther's banquet. "I don't even feel like going now." He thought to himself.

So the king and Haman went to the banquet that Queen Esther had prepared for them. After a while the king asked Esther, "So what is it you want my dear Queen Esther? Please tell me." 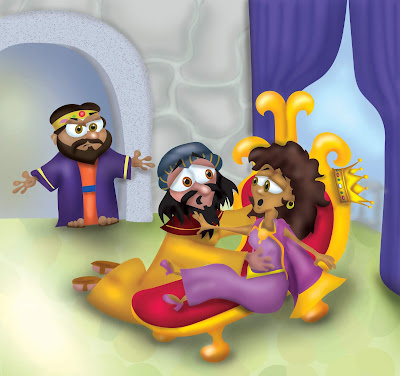 Esther answered him, Please my lord, if you are pleased with me, please spare me and my people. If we would only be taken as slaves, we could live with that, but a decree has been sent out to kill me and my people. I hate to bother the king, but it really is a matter of life and death."
"Who would do such a thing?!" the king demanded. "Who would dare touch you?"
Esther relied, "It is the evil Haman, my lord. He is our enemy." Haman grew pale with fright right before the king and queen. Then the king jumped to his feet in a rage and went into the palace garden to think. Haman and the queen stayed behind.
Haman began to plead with Queen Esther, "Please my dear queen, this is all a big misunderstanding. We can work this out. Please tell the king to have mercy on me!" Esther didn't say a word, but Haman could tell that his his words were not reaching her heart. He fell on the couch where Esther was reclining, then he grabbed her arm. She pulled back and he was leaning into her. Just then the king returned and saw Haman nearly on top of the queen. "Will this evil man even assault the queen right here in the palace before my very eyes?" The king shouted in anger.
The kings attendants moved in quickly and grabbed Haman. The servants knew that the king was wondering what should be done to Haman. Then Harbona, one of the servants spoke up. "Haman has set up a Gallows seventy-five feet tall in hi own courtyard. He was determined to use it to hang Mordecai the Jew, the same man who saved your life."
"Then hang Haman on his own gallows!" the king ordered. So they did as king commanded.
The story is not over however, the decree that Haman issued was sealed with the signet ring of the king. No one can over rule the law. Not even the king himself. So the date was still set for the annihilation of all the Jews. We will see what happened next time.

Posted by MrBibleHead at 10:02 AM No comments: