Last time we checked in on Moses and his brother Aaron, they were leaving the king of Egypt after he had promised them that he would let the Hebrews go if God would get rid of all the frogs, but he lied.
So far God has turned Moses’ staff into a snake. He has turned the Nile river to blood and He has covered all of Egypt with frogs. God knows that it will take 8 more miracles before the king finally lets the Hebrews go.  Here is a list of the first nine. (We’ll look closer at number ten, because that’s the one that finally freed the Hebrews from slavery.)

1. The Nile river turns to blood. All the fish die and the Egyptians have to dig new wells for water.
2. Frogs come up from the water and cover the land. When they die, all of Egypt smells really bad. 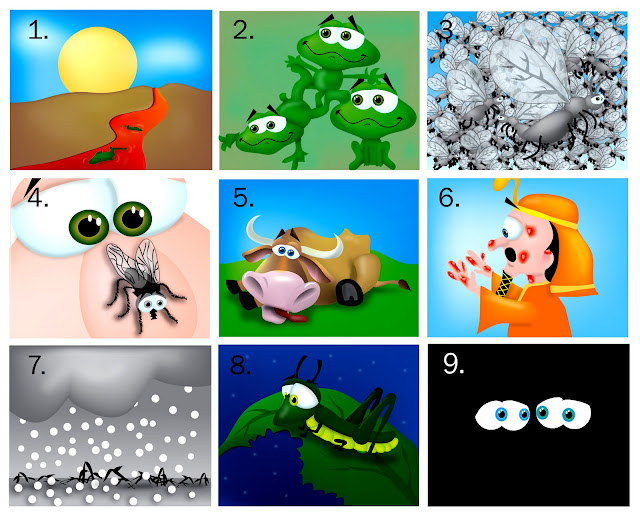 3. Gnats (which are those teeny tiny bugs) come up from the dust and swarm over all of Egypt.
4. Flies swarm over all the land, causing all kinds of problems with sickness and food and comfort.
5. The cows and donkeys and sheep in Egypt will get sick and die except for the Hebrew’s livestock.
6. Sores (called boils) break out on all the Egyptians, all over their bodies, but not on the Hebrews.
7. A great hailstorm destroys the crops in the fields and kills many of the Egyptian’s livestock.
8. A swarm of beetles called locusts swarms over the fields and eats the remaining plants and crops.
9. Total darkness covers all of Egypt for three days, however the Hebrews still have light.

“Tonight an angel of death will fly over Egypt. The firstborn son of every family will die except for the families that put the blood of a lamb on their door. “ God told Moses.
Moses went to all the Hebrew families and told them to put the blood of a lamb on their doors and God would spare their oldest son. So they did and the angel of death flew over Egypt and all the firstborn sons died except for the families that put the lamb’s blood on their door. The angel of death passed over them and that is why the Hebrews celebrate Passover till this day. Jesus is our lamb. He died and shed His blood so that if we believe that He is God’s son and that he died and rose for us, God’s judgement would pass over us and we will live forever with Him!
The king woke up in the middle of the night  to the queen’s cry because their oldest son had died. He went right away to Moses and told him to leave Egypt. All the Egyptians were so glad to be rid of the Hebrews, that they gave them gold and silver and clothing! Just like God said they would. It’s a good thing that the Hebrews weren’t in their pajamas and they didn’t have any bread in the oven, because they were told to leave at once! But  soon after they left.... the king changed his mind again. He and all his men went out to the desert to bring them back. Next time we’ll find out if they catch up with them.

About 2 million Hebrews left that night. In the Bible it is called the exodus which is where the name of the second book in the Bible came from. The Hebrews were  slaves to the Egyptians for 430 years! To us that seems like such a long time. But the Bible says that 1000 years is like a day to God. (2Peter 3:8) So in “God years” they were only slaves for about 11 1/2 hours.
Posted by MrBibleHead at 12:42 PM 7 comments: