Thank you so much for everyone that has visited my blog over the last couple years! 100,00 visitors! I have been so blessed and encouraged by all the emails that I have received from kids, parents, churches, pastors and ministry leaders from all around the world. India, Bulgaria, Australia, the Philippines, Germany and the UK... and of course The USA. As a great big thank you, I am giving away 3 Mr.BibleHead t-shirts, a kid’s Message picture Bible, a 14X18 signed poster of Balaam and his Donkey and a Mr.BibleHead mousepad. Just leave a comment here or at my facebook page or follow this page or like the Facebook page between now and July 20 and you’ll be entered to win. If you do all 4 things, you’ll be entered 4 times. Thanks again everyone and God bless you! 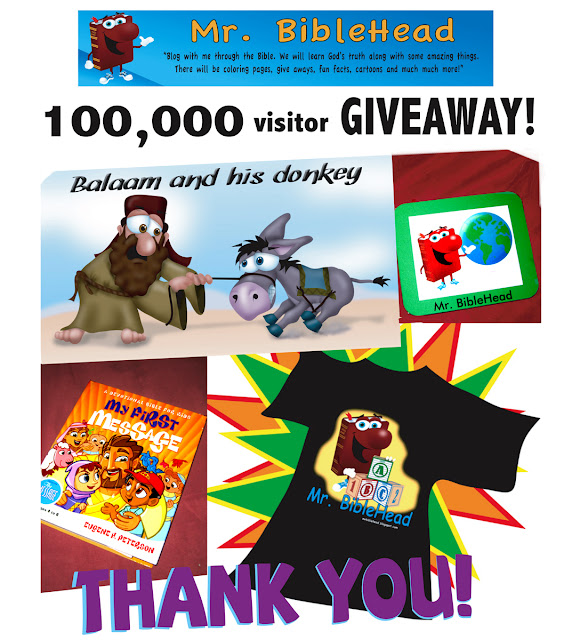 The next few chapters of the book of Joshua tell of all the armies that Joshua led the Israelites to defeat. (31 in all) However there was one army that tricked Joshua into signing a peace treaty with them. Here is what the Gibeonites did. 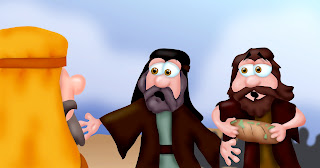 The Gibeonites heard all about how the Israelites were conquering all the cities on their way to Canaan. (The promised land) They knew that they were in line to be conquered. So they took some moldy bread, dressed in worn out clothes and told Joshua that they had traveled from a far off land. “Look even our bread is moldy!” They said. “Sign a peace treaty with us so you will not conquer us like you did to Ai and Jericho.” Joshua believed them and signed the treaty. Then he found out that the Gibeonites were one of the armies that was on the way to Canaan. But since he signed the agreement, they let the Gibeonites live. However they did make the Gibeonites their servants.
In chapter 10, the Amorite army was putting up a pretty good fight against the Israelite army. They were batting the Amorites in the city of Gibeon.
Joshua prayed: “ God, please let the sun stay up longer than usual so that we can finish defeating the Amorites this day.”
God answered Joshua’s prayer and held the sun in the sky for as long as it took for the Israelites to win the battle! That is so cool! Sometimes I wish God would make the day last a little longer when I am doing something fun. How about you? Have you ever wanted a day to never end?
After 40 years of wandering in the wilderness, the Israelites finally made it to the promised land! Chapters 14 through 22 are about how the land was divided up between the tribes of Israel. Then God gave the Israelites rest from their enemies for many years. Finally when Joshua was very old, he called all the leaders together.” I am very old and will soon be gone, but God has promised you more land just on the other side of the river. But you will have to defeat a few more armies. Remember what God told me when I first became your leader many years ago. ‘Be strong and courageous.' Now I am telling you to do the same.” Joshua continued. “Be faithful to the Lord, for He has fought our battles and He will fight yours if you be careful to follow all the instructions written in the Book of the Law of Moses. If you become disobedient, the Lord will not hesitate to remove you from this land.” 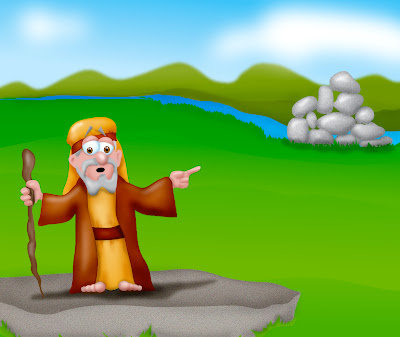 Then Joshua reminded the people of their history. How God had promised Abraham that He would have many descendants and that they would live in the promised land. He reminded them of how God chose Moses to lead them out of Egyptian slavery. How God sent the plagues to change Pharaoh’s mind, then when the Israelites were trapped, God parted the Red Sea and let them pass through. How God provided manna every Morning for them to eat and even though they wandered for forty years in the desert, God made sure that their shoes never wore out. Joshua reminded them about how God parted the water of the Jordan river so that they could cross over into the promised land. He pointed to the twelve stone monument that they built by the river as a reminder of God’s faithfulness.Then he reminded them of all the battles that God had given them victory in as the entered the promised land.
Joshua finished his speech saying, “So honor the Lord your God. Serve Him with your whole heart. Don’t ever go back to serving the idols that your grandparents and great grandparents served. Today you make a choice. Are you going to serve the God who did all these things for you that I have just mentioned, or are you going to turn your back on Him and go back to the idols of your grandparents.You choose, but as for me and my house, we will serve the Lord!” Those are some famous words spoken by Joshua. You may have heard them or seen them on a plaque.
The Israelites shouted! “We will serve the Lord! We will serve the Lord!” So Joshua wrote up a contract between them and God and recorded it in the Book of the Law of God to remind the people of the covenant that they made with God. Shortly after this, Joshua died at the age of 110.

So what can we learn from Joshua and the Israelites?
First of all, the Bible doesn’t say anything about Joshua praying while the Gibeonites were tricking him into signing a treaty. Sometimes we think that we don’t need to pray about certain things. God wants to be involved in our decisions and our circumstances. The Bible says “pray about everything and then don’t worry about it.” (Phil 4:6)
Second, Joshua tells the people to be strong and courageous just like God told him. Being a Christian isn’t easy sometimes. We need to be strong (with God) and courageous (doing the right thing despite circumstances)
Thirdly, Joshua reminds the people what God has done for them. When we are facing a tough decision or circumstance, remember how God has been with you through your troubles in the past.
Finally, and this is the main theme of the last book of Joshua, God made us with free will. That means that we can choose things including whether or not to serve Him. Joshua tells the people that their grandparents had idols made of stone and wood. He told them that they had to choose. They could not serve God and the idols. (Mt 6:24) We don’t have stone and wood idols today. But we do have video games, TV, social media  etc. These things are not bad, unless they take more of our attention than we give to God. Then they become idols! Joshua calls the people to make a choice. He said that he had already made his choice. He and his family were going to serve the Lord. How about you? Have you made a choice to always put God first? and to serve Him?
Posted by MrBibleHead at 2:42 PM No comments: