When we left off last time, the king's men were getting ready to comb the countryside for the most beautiful virgins for the Miss Persia competition.
Now there was a man named Mordecai that lived very close to the palace. He had a cousin named Esther, who was very beautiful. Esther's parents died when she was young, and her cousin, Mordecai took on the responsibility of raising the young girl as his own daughter. As a result of the "Miss Persia" contest, Esther had no choice but to be brought to the king's harem with many other young women. Mordecai warned her not to tell anyone that she was a Jew.
Esther was placed in the care of a man named Hegai. Hegai was one of the king's top advisers and he was very impressed with Esther from the start. He treated her kindly and immediately ordered beauty treatments and assigned her the seven best maids to care for her..He also moved her and the maids to the best chambers in the palace. 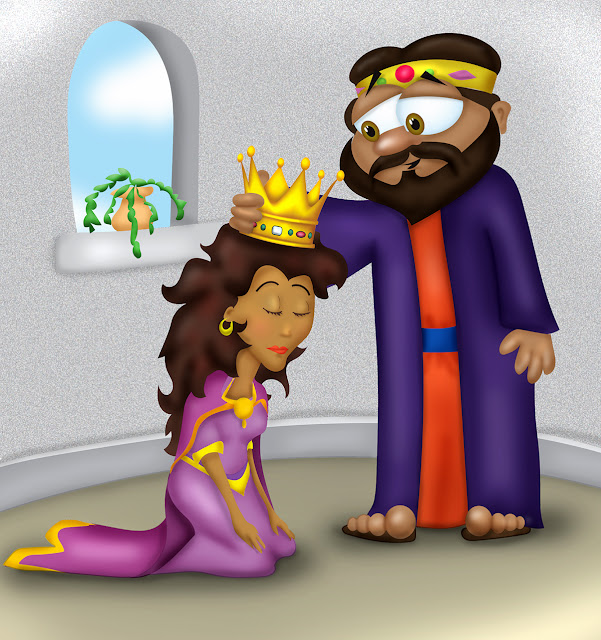 Why was Hegai so impressed with Esther right off the bat? Yes, she was beautiful, but I'm sure there were many beautiful girls that were brought to the palace. Beauty is not only an outward thing, it is also what is on the inside. Mordecai raised Esther to be a God-serving humble girl and Hagai noticed that right away. What do others notice about us right away? Does the beauty of God's presence in our hearts shine, or do we hide behind a proud attitude?

Esther had not told anyone of her Jewish heritage, just as Mordecai suggested. Every day he would visit the palace and ask about Esther and how she was doing. The beauty treatments were very intense, and the continued for one full year! Finally it was time for the "Miss Persia" contest to begin. The women were given their choice of clothing and jewelry, but Esther accepted the advice of Hegai and wore what he picked out. The women were presented to the king one by one,  and when Esther's turn finally came, she was admired by everyone. The king was so taken with her, that he placed the crown on her head right then and there! All the rest of the women were taken to the king's harem and were cared for there for the rest of their lives, never to marry. It was very sad for them, so it was really a big deal to be selected by the  king. 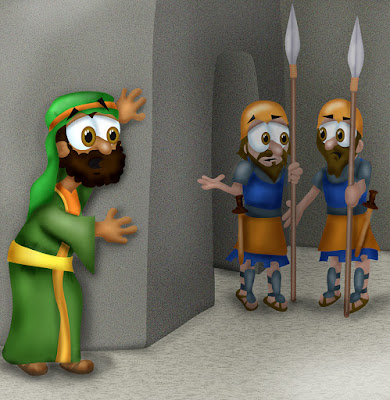 So Esther became queen and Mordecai became a palace official. All the while they kept Esther's nationality and family background a secret. As a palace official, Mordecai would basically patrol the palace grounds, making sure everything was in order. One day while he was on duty, he overheard two of the guards that were outside the king's private quarters talking. They were very angry with King Xerxes and planned to have him killed. Mordecai quickly passed this information on to his cousin, Esther, the queen. She then told the king about it and gave Mordecai credit for unearthing the plot. The king launched a thorough investigation into the allegations, and it was found to be true. The two men were then hanged in the gallows.

The book of Esther is very unusual in the fact that it never mentions God once! As we read the story, we can see God at work. He is using situations and circumstances to allow people to be in the right place at the right time. As the story continues, observe how much God is involved in the whole book. Aren't our lives like that. We don't see God, but He is there, touching hearts, touching lives and using circumstances to further His plan of redemption. It is God's will that everyone come to a saving knowledge of him. (1Timothy 2:4)
Posted by MrBibleHead at 5:02 PM No comments:

The Book of Esther (1-2) Vashti Banished

Wasn't Nehemiah a great story? And it is all true....it really happened all those years ago. Now we are going to go back in time a little bit to  about 40 years before Nehemiah rebuilt the wall around Jerusalem. The Bible is not in chronological order. Which means it isn't in order of how things happened. The book of Ester is set in Persia after Nebuchadnezzar and Babylon were overthrown by the Persian Empire. The story of Esther is set about 30 years after the temple in Jerusalem was built and Ezra was the prophet of the time. At this time most of the Jews are still scattered throughout Persia.

Now there was a king of Persia named Xerxes. Here ruled over all 127 provinces, from India down to Ethiopia. He had been king for 3 years when he decided to throw a huge party for all the princes and military officials. The party lasted 6 months! Then just when you think the party was over, the king throws a 7 day party for his palace servants and immediate officials. In the meantime, Queen Vashti was throwing her own party for the women of the kingdom.
On the seventh day of the party, after the king had a little too much to drink, he started bragging about what a beautiful wife he had. Then he sent some of his servants to go bring the queen to him so he could show off her beauty in front of all the other men. When the message was conveyed to Queen Vashti that the king wanted her to parade around in front of a bunch of men who had been drinking for seven days, she refused. Disobeying the king was unheard of at the time. A queen would never refuse the request of the king!
As soon as King Xerxes heard about Queen Vashti's response, he became infuriated and called his consultants together and asked their advice, because they were experts in Persian laws and customs.
"What must be done with Queen Vashti?" The king asked. "What does the law say about a penalty for a queen who disobeys her king?" 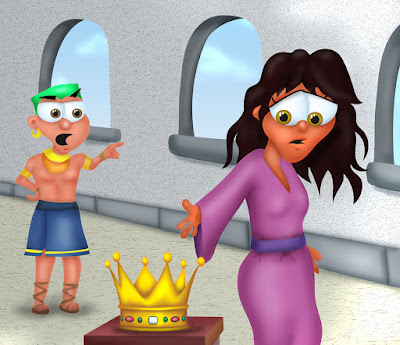 One of the king's consultants whose name was Memucan answered. "Queen Vashti has not only wronged the king, but she has also wronged all the princes and the male subjects in the kingdom." He continued. "The queen's behavior will become known to all the women in the kingdom, and before you know it, they will begin disrespecting their husbands which will lead to disorder and chaos in your kingdom." 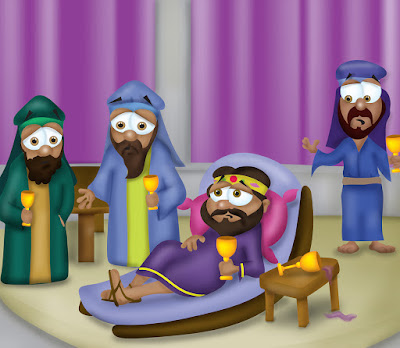 One of the other consultants spoke up. "If it please the king, let Queen Vashti be banished from the kingdom and never come before the king again! ... And let her position be given to another who is more worthy! Also send out a decree that all wives must honor their husbands because he is the master of the household."
King Xerxes agreed and the queen was banished from the kingdom, never to be heard from again. Soon the king began to regret what he had done. If he had not acted so prideful, he would have not requested that the queen come before him and all the men then she would not have had to refuse. He was sad because he missed her.

The Bible says that pride leads to destruction. (Prov 16:18) and patience is better than pride. (Eccles 7:8) God does not like pride. Pride hurts us and God doesn't want that. If we humble ourselves, God will lift us up. (James 4:10) The next time you feel like showing off or bragging about yourself... remember that it may make you feel like a big shot at the time, but eventually regret will set in, just like it did for King Xerxes.


Some of his advisors saw that the king was down in the dumps over the whole situation and one spoke up. "May your servants travel to each of the 127 provinces of Persia and bring back to most beautiful virgins. We will hold a Miss Persia contest and whom ever you choose, will be the next queen of Persia!" The king liked the idea and the servants were dispatched to find the most beautiful virgins in all the land.

Next time we will get an inside look at the Miss Persia contest.