David and his men traveled through the wilderness to escape from his son Absalom. They finally arrived in the town of Mahanaim, where they were warmly greeted. The people of the town brought sleeping mats, bowls, barley, flour, grain, beans honey, butter sheep and cheese for David and his men. "You must be hungry thirsty and tired from your long trek through the wilderness." They said. 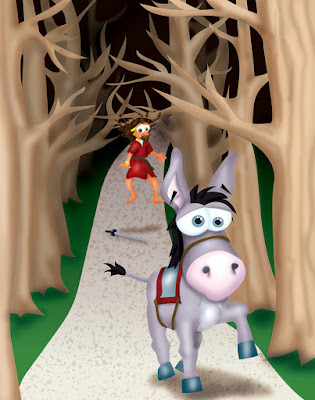 Then David split his troops into three groups and appointed three generals to lead his men as they set up camp in Mahanaim. David wanted to go with them into battle, but his men talked him into staying back because they knew that he was the one that Absalom wanted to kill. So David stood by the city gate as the troops headed out to battle. He gave these orders to all the men as they passed by. "Please deal gently with my son Absalom. Spare his life for my sake."

So the troops went out and the battle began. The Israelite army was beaten back by David's army and 20,000 men lost their lives that day. During the battle, Absalom unexpectedly came upon some of David's men. He tried to escape on his mule, but as he rode beneath the branches of an oak tree, his hair got tangled in the branches. His mule kept on going  but Absalom was left hanging there defenseless. One of David's men saw what happened and he went back to report what he saw to Joab, one of David's generals.

"What?" Joab demanded. "You saw him hanging there and you didn't kill him? I would have given you 10 pieces of silver if you had."
"You heard king David say, 'For my sake do not harm young Absalom.' I would not have killed him for a thousand pieces of silver!"
"Enough of this nonsense!" Joab shouted as he grabbed three daggers and headed toward the oak tree where Absalom was still dangling. Joab stabbed Absalom. Then Joab's men took Absalom down from the tree, threw him in a pit and buried him with stones.

David was waiting for news of the battle at the city gate. He saw a man in the distance running toward him. The man finally approached David. "All is well my lord. The Lord your God has handed over the rebels who dared to stand against you." But David was more worried about his son. 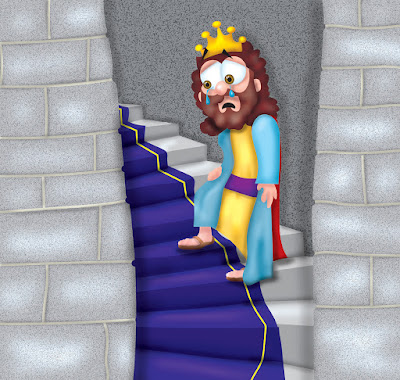 "And what of young Absalom?" David inquired. "Is he alive and well?" The man was afraid to tell David that his son was dead, so he lied and told him that he didn't know. Just then another man showed up with news, and David asked him about Absalom. David was completely heartbroken when he found out that Absalom had been killed. He walked slowly back to his room, weeping the entire time.

Word soon reached general Joab that David was very upset about Absalom's death and that there was no joy among the men for his victory over the Israelites. Joab was very angry and went to see David. "It seems to me that you would have been happier if we had all died and lost the battle and Absalom had lived. You are making me and all your men feel as if we had done something wrong." Joab said.
David realized that the troops needed to be recognized for their victory, so he went out to the city gate and congratulated them. In the meantime, all the people all over Israel were in a huge discussion about reinstating David as the king over all of Israel. The people finally agreed that it shall be done, but not without a few revolutionists who continued to plot against David.

Did you even notice that in life.....it is never all good or all bad. We have to be thankful for the good things in the midst of trouble. And celebrate with our eyes open and hearts receptive to people around us who may be struggling. Don't let our emotions (joyful or downcast) blind us to loving others so that God may be glorified.


Posted by MrBibleHead at 11:54 AM No comments: