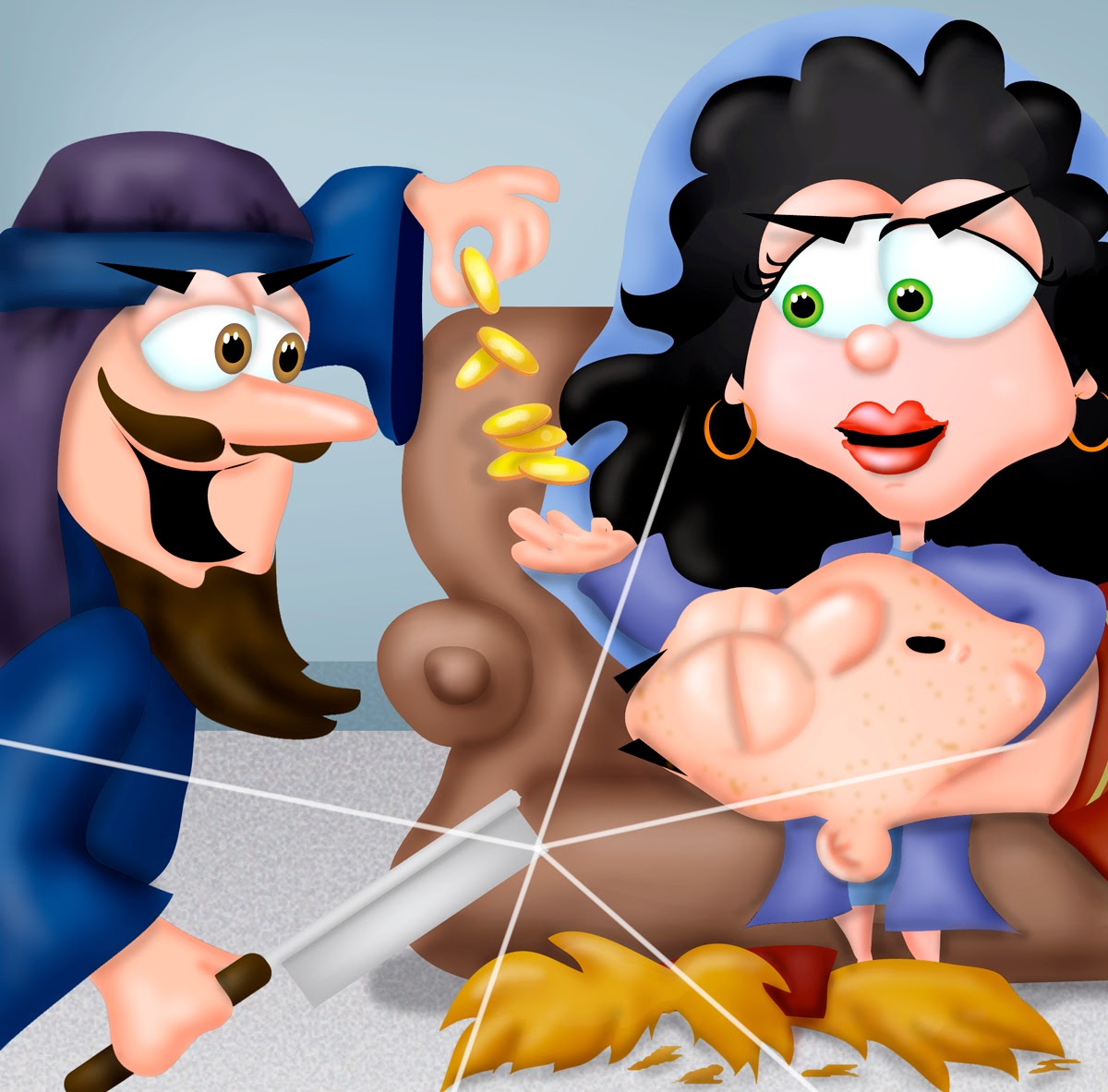 Last time we were with Samson, he had finally told Delilah the truth about his strength. Delilah was only with Samson because of the money she could make by helping the Philistines capture him. The truth about Samson’s strength was: That Samson was raised up as a Nazarite. His hair was never cut. Because God was going to use Samson to help overthrow the Philistines and free the Israelites from their domination, and because Samson’s hair was a symbol that he was dedicated to the Lord, God gave Samson amazing strength.
Samson told Delilah that his strength was in his hair and that his hair was never cut.  As Delilah let Samson lay on her lap, she signaled to a man that was hiding in the other room. He came into the room with a knife for Samson’s hair and the money for Delilah.

“Samson! The Philistines have come to capture you!” Delilah screamed as she awoke Samson.
“No problem.” Samson thought. “I’ll just do as I have all the other times and put these Philistines out into the streets.” But he didn’t realize that this time, the Lord had left him.
So the Philistines captured Samson, gouged out his eyes and sent him to Gaza where he was bound in chains and forced grind grain in prison. But before long, his hair began to grow back. 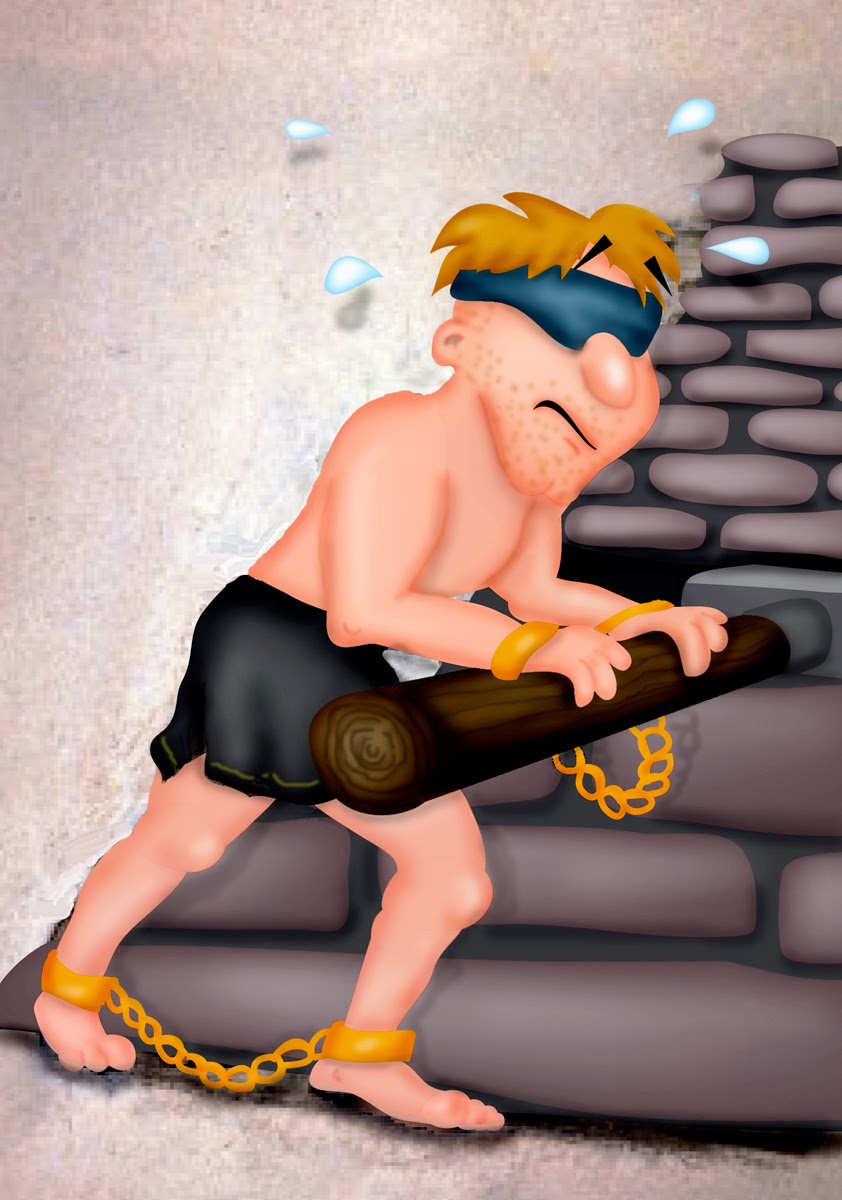 The Philistine leaders decided to throw a huge party. They wanted to offer sacrifices to their god, Dagon, for finally giving them victory over their greatest enemy, Samson. The people were all yelling and screaming with joy. “Dagon has given us victory! The one who has killed so many, is now in our power! Praise to Dagon! Praise to Dagon!”
Half drunk by now, the people began to demand. “Bring out Samson! We want him to perform for us!
So Samson was brought from prison and placed in the center of the temple between two large pillars. A servant led him and Samson asked him to place his hands on the pillars to rest. The servant did so.
The temple was filled with thousands of people. Most of the guards and leaders were there to celebrate and to make fun of Samson.
Then Samson prayed. “Dear God, please be with me this one last time. Strengthen me to get revenge on these Philistines who have blinded me. Please God Almighty. Please!”
Samson pressed his hands against the pillars and God gave him back his strength. He pushed with all his might. “Let me die with these Philistines!” He cried out. And the temple came crashing down killing the Philistine leaders, many of the people, the guards and Samson. Samson killed far more Philistines in his death than he did while he was alive. This led to the eventual fall of the Philistine empire and the rescue of the Israelites. Just as God told Samson’s parents would happen. Samson rescued his people from the Philistines. 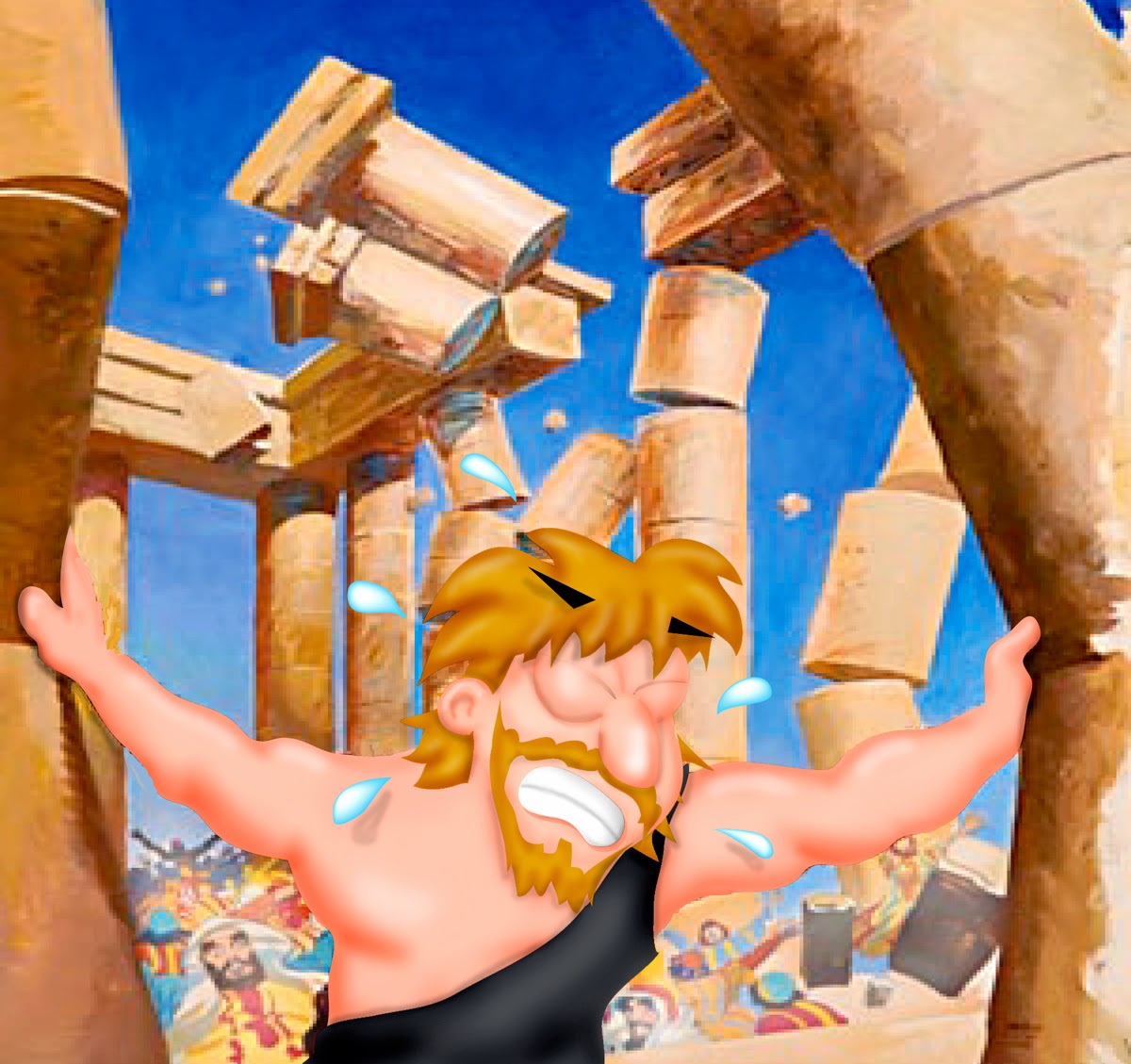 Wow! What a story! Not just a story.... A true story! “OK," you may ask. “So what? How does this have anything to do with me?” A lot. Remember at the beginning of the Samson story. God told Samson’s parents that He was going to use Samson to carry out his plan to rescue the Israelites, so they dedicated him to God. Samson was given the gift of great strength to carry out the purposes of God. Do you know that God is still working out His plan? He wants to use each of us and the special gifts or talents that He gave us to carry it out. Are you a good singer, speaker, artist, helper, friend, organizer etc..... God gave you a gift. He gives everyone a gift. That gift is not for yourself, but for others and for God’s purposes. Samson, knew he was strong. He used the gift that God gave him to get girlfriends and do whatever he wanted. God gives us a choice. He gave Samson a choice. But God also has a plan and He is not going to let our choices stop his plans. He still used Samson to carry out His plan. Samson could have done life God’s way and his life would have been a lot easier, but he did things his own way and ended up blind and in prison.
How about you and me? Are we joining God in his plan by using our gifts for Him, or is He going to work His plan in spite of us.  If it the latter, we may be in for some uncomfortable times.
Posted by MrBibleHead at 1:38 PM 1 comment: